skip to main | skip to sidebar

It is admittedly difficult to write a biographical sketch of a man whose life has spanned eight decades and who at the time of this writing continues to contribute to the Lord’s work in various ways. Added to this difficulty is the fact that the good man’s life has been very rich and it has had a very powerful influence on the lives of many who have come to know him. He has served faithfully in many spheres of life: university professor of philosophy, academic colleague, theologian, author, preacher, presbyter, pastor, travelling companion, and friend. A sketch like this can only touch upon some highlights. It not intended to mislead by omitting things, but rather to provide the reader with at least some information concerning the background and life of this faithful servant of the Most High.

William Young was born in Brooklyn, NY on May 9, 1918. At a very early age, he excelled in his studies. In 1934, at the age of 16, he entered Columbia University, NY, where he became a member of the League of Evangelical Students.

Graduating from Columbia in 1938 with a Bachelor of Arts degree in pre-theological studies strong in the classical languages of Latin and Greek, he went on to study at Westminster Theological Seminary in Philadelphia. During those years Westminster was a stronghold of Reformed orthodoxy and the faculty included Cornelius Van Til, John Murray, E. J. Young, Ned Stonehouse, John Skilton, Paul Woolley and R.B. Kuiper. By 1941, he had earned both the Th.B and Th.M degrees; and upon graduation, Mr. Young continued his education by pursuing a Th.D degree at Union Theological Seminary in New York City. He graduated in 1944 with a thesis entitled “Development of a Protestant Philosophy in Dutch Calvinistic Thought Since the Time of Abraham Kuyper”. This was published in the Netherlands under the title, Toward a Reformed Philosophy. (Franeker, T. Wever, 1952)

During his time at Union Seminary Mr. Young applied to enter the Christian ministry in the Orthodox Presbyterian Church (OPC). He was ordained and received into the New York / New England presbytery in 1944. From these early days in the OPC, Dr. Young established many life-long relationships with other reformed men in the ministry as well as with several congregations in the OPC and elsewhere. One such relationship began late in 1944, when at the request of Westminster Seminary professor, John Murray, Dr. Young began to preach regularly in an unaffiliated Presbyterian congregation in Toronto known as the Bloor Street congregation. (The church later moved to Victoria Park Avenue, also in Toronto.) He served there for 2 years from 1944-1946; and after returning to his family’s home, which was now in Queens, NY, for about a year, he accepted a teaching position at Butler University in Indianapolis, Indiana. Dr. Gordon H. Clark was the Chair of the Philosophy Department at the time and Dr. Young taught courses mainly in the history of ancient and Modern philosophy. His tenure at Butler was from 1947-1954. In 1951 he took a one year sabbatical leave in the Netherlands and collaborated with Dr. David H. Freeman in the translation of Volume I of Herman Dooyeweerd’s philosophical work A New Critique of Theoretical Thought.

After leaving Butler in 1954, Dr. Young matriculated as a graduate student at Merton College, one of the oldest at the University of Oxford. He was awarded the B.Litt degree in 1960 and the M.Litt in 1980. Between his years at Oxford, Dr. Young returned to preaching and teaching. In 1955, he was back at Victoria Park where he filled the pulpit for another year. In 1957, Dr. Morton Smith recommended him for a teaching post to the President of Belhaven College in Jackson, Mississippi; and soon thereafter, he accepted a position there as Professor of Philosophy and Psychology. He stayed there for just one year before returning to Oxford. After another brief period of study there, and several preaching engagements at the Victoria Park congregation in Toronto, Dr. Young joined the faculty of the University of Rhode Island (URI) where he taught philosophy from 1960 until his retirement in 1988.

In those years the Philosophy Department at URI had a conservative Christian character. Besides a range of undergraduate philosophy courses, Dr. Young was able to offer courses in Biblical Thought, the History of Christian Thought, and the Philosophy of Religion. Later, when a Master’s program was introduced, his course load included Symbolic Logic, Philosophical Logic, Philosophy of Language, Studies in Patristic and Medieval Philosophy, and studies in modern philosophy from Hegel to the present. Courses in classical religious thinkers – including Augustine, Edwards, and Kierkergaard – were added later. Besides publishing a number of articles and reviews during this time, Dr Young also published Foundations of Theory (The Craig Press, 1967) and Hegels’s Dialectical Method, (The Craig Press, 1972). Dr Young spent 1966 in Finland studying modal logic and working at the Wittgenstein archive.

During his early years in Rhode Island, Dr. Young attended several reformed churches, including Grace OPC in Fall River, Massachusetts where Dr. David Freeman Sr. was the pastor. Following Dr. Freeman’s retirement from the pastorate several of the older folks at Grace OPC eventually left the congregation over worship concerns. They began holding meetings in Seekonk, Mass. and invited Dr. Freeman to conduct services for them in his home. After the Freemans moved away to retire in Florida, Dr. Young took over the services in 1972. The small group, which met regularly in a Ramada Inn, came to be known as the Presbyterian Reformed Fellowship of Seekonk, Mass. This small church proved to play a major part in Dr. Young’s life for many years to come.

In 1976 Dr. Young was received as a ministerial member of the presbytery of the Presbyterian Reformed Church (PRC). The PRC had been formed under the guiding hand of Professor John Murray in 1965; however, by 1976 the presbytery was reduced to just one congregation, in Chesley, Ontario with a remote preaching station in Lochalsh, Ontario. Nevertheless, Dr. Young joined the denomination as it remained faithful to its founding principles and reformed distinctives related to the simplicity and purity of the worship of God. In 1978, Dr. Young led the fellowship group in Seekonk into the PRC as a congregation and the presbytery appointed him to continue preaching there as stated supply. Following his retirement from URI, he was formally called by the congregation as pastor of the church. He has faithfully served in that capacity ever since. The group has long since moved from Seekonk and now meets in nearby East Greenwich, RI. It has adopted the name Presbyterian Reformed Church of Rhode Island.

Although presently slowed somewhat by age Dr. Young continues to serve as pastor and preaches occasionally. He has seen some of the fruit of his pastoral labours as by God’s grace the little church which he led into the PRC in 1978 has grown, in spirit and in number, especially in recent years. He serves the PRC on two important committees in the presbytery. Up until very recently, he continued to write articles and reviews for various philosophical and religious publications. Dr. Young resides in the southern RI area. 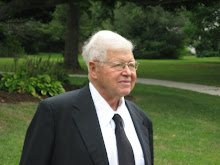